Allow the Apple-1 computer to generate sounds and simple melodies via BASIC or Assembler.

It is addressed through a TTL logic, which will be explained later. Some circuitry has been added to ensure compatibility with the MOS 8580. An amplifier has also been added in order to provide an adequate output level. 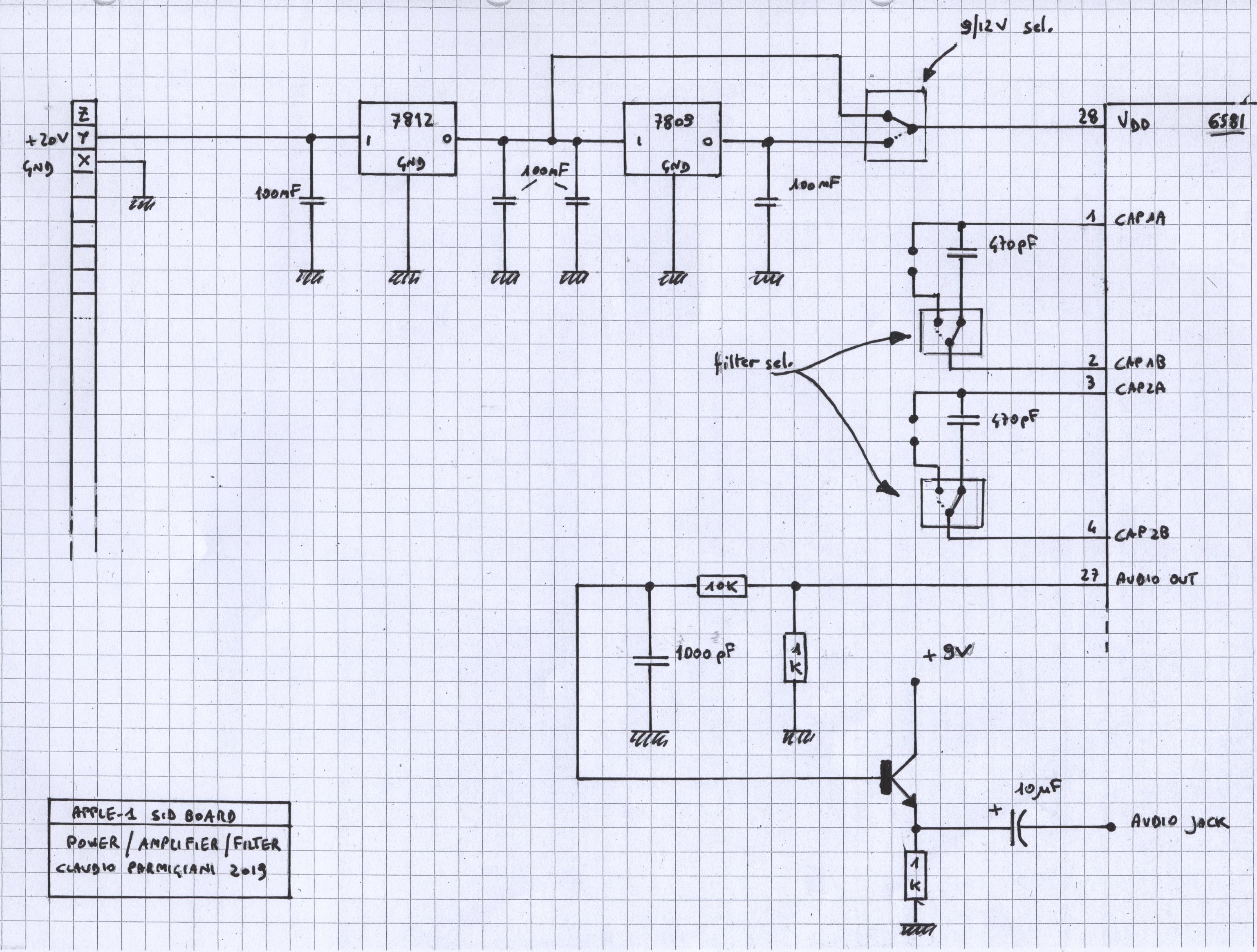 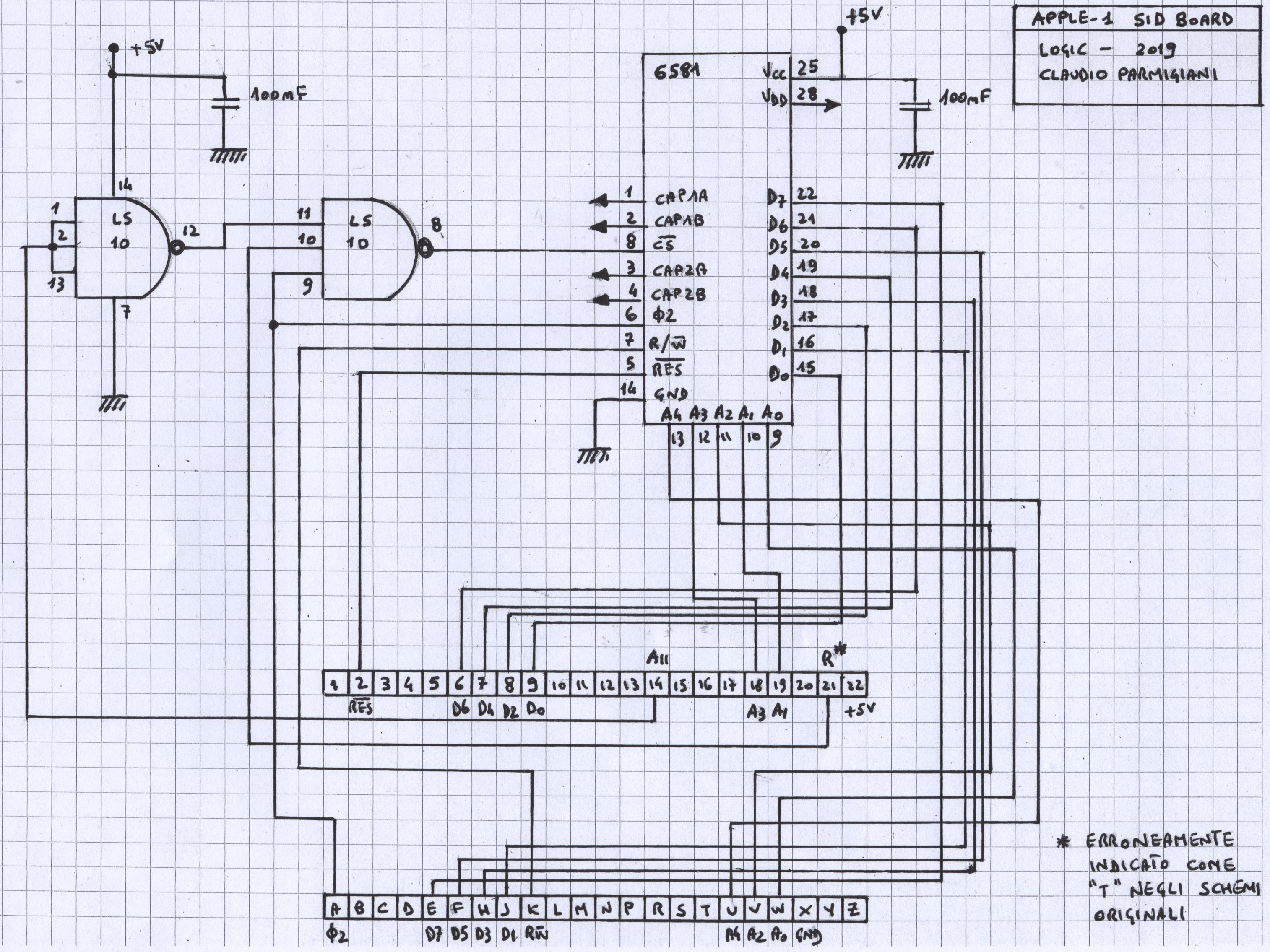 Chip Select (/CS) signal is derived from a TTL 74LS10 logic port, which provide a logic LOW signal when:

$C8xx address is resolved as follows:

“R” signal is usually hard-wired on the CHIP SELECT section of the Mainboard of the Apple-1. It is usually connected to the four kBytes identified by $Cxxx addresses (RC wire), in order to allow the Cassette Interface to be addressed properly at $C1xx.

Therefore, it is not necessary to analyse all the four most significant bits (1100) to gather the “C” part of the address: it will be enough to pick up the LOW state of “R” line.

To pick up the “8” part of the address: A11 HIGH state will be taken into account.

IC 74LS10 performs the necessary logic operations mentioned above, plus the ɸ2 clock.

According to the datasheet, the 6581’s access time is typically 340 ns.

At 1 MHz ɸ2 clock the IC should provide a /CS signal of about 500 ns, which fits perfectly with 6581’s specifications.

The Cassette Interface is hard-coded to be addressed between $C000 and $C1FF (512 memory locations, but only 256 bytes used for PROM addresses, other addresses are either “duplicates” or dedicated to output).

The Apple-1 SID Interface is hard-coded to be addressed between $C800 and $CFFF (2048 memory locations). This means that the SID’s 29 registers will be “duplicated” many times at different addresses.

This is not a big deal: originally all the four kBytes of the $Cxxx address block would have to be occupied by the cassette interface only.

The split of the 4096 addresses in two distinct parts does not cause bus collisions, is harmless, and it does not needs CHIP SELECT re-wiring on original Apple-1s.

Due to the address mapping explained above the first register of the SID will start at decimal address 51200. Apple-1’s “Integer BASIC” handles numbers with the 16-bit Signed Integer format.

51200 is greater than 32767 (the largest acceptable number) therefore, it will “roll over” and became a negative number.

To POKE a specific register just use the negative value. For example, POKE -14312,15 will raise the volume to the maximum.

The same applies to PEEKs as well: PRINT PEEK(-14311) will show the content of the POTX register.

Of course, there are no such things like “negative memory locations”; it is just a matter of notation.

For convenience, here is a table that identifies all the 29 registers in different notations (also as a download):

The following program has been adapted to Integer BASIC from BASIC V2 in order to match the new SID initial address and the one-character variable’s name.

The execution of the program above will produce a single tone for a few seconds. 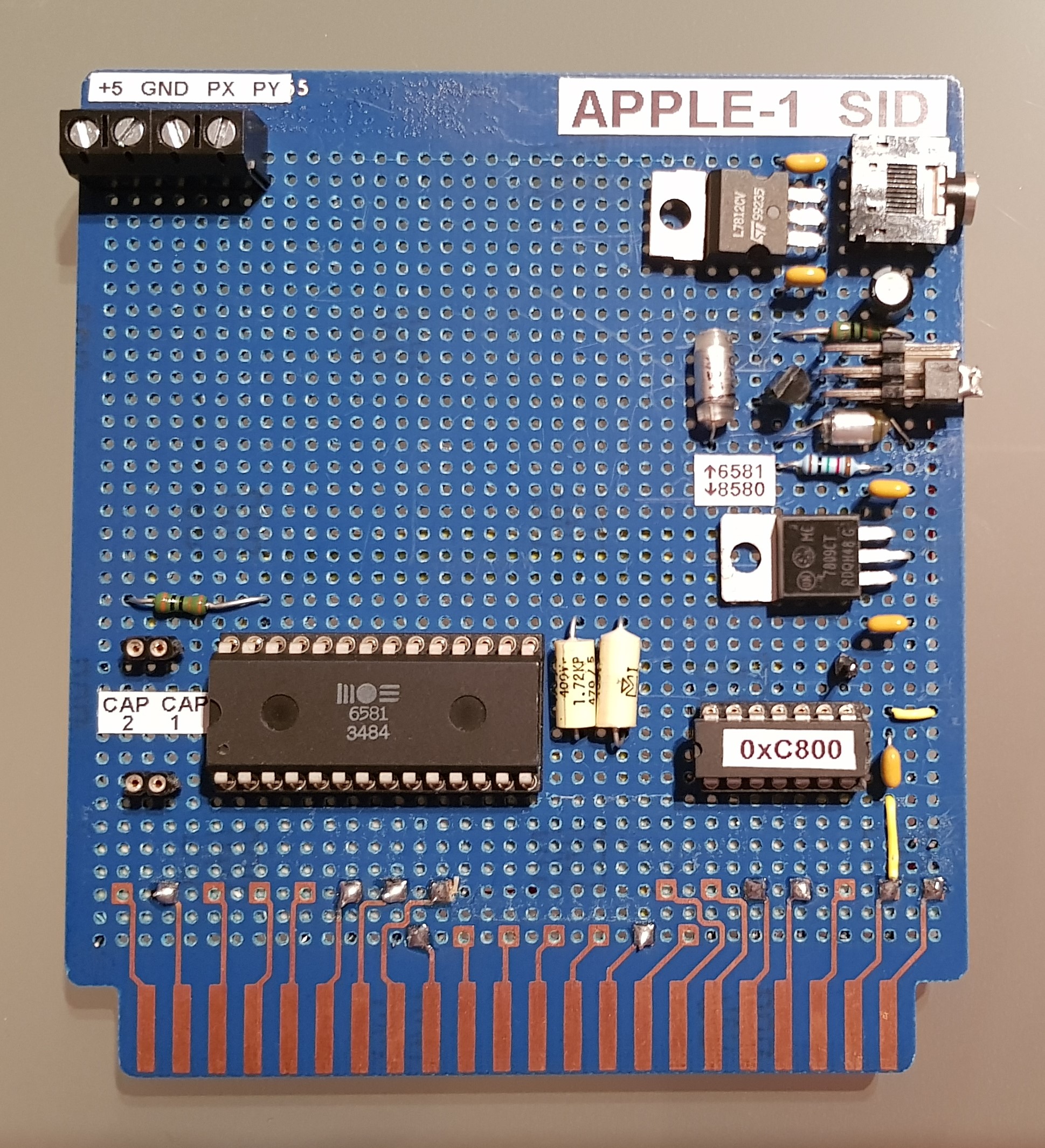 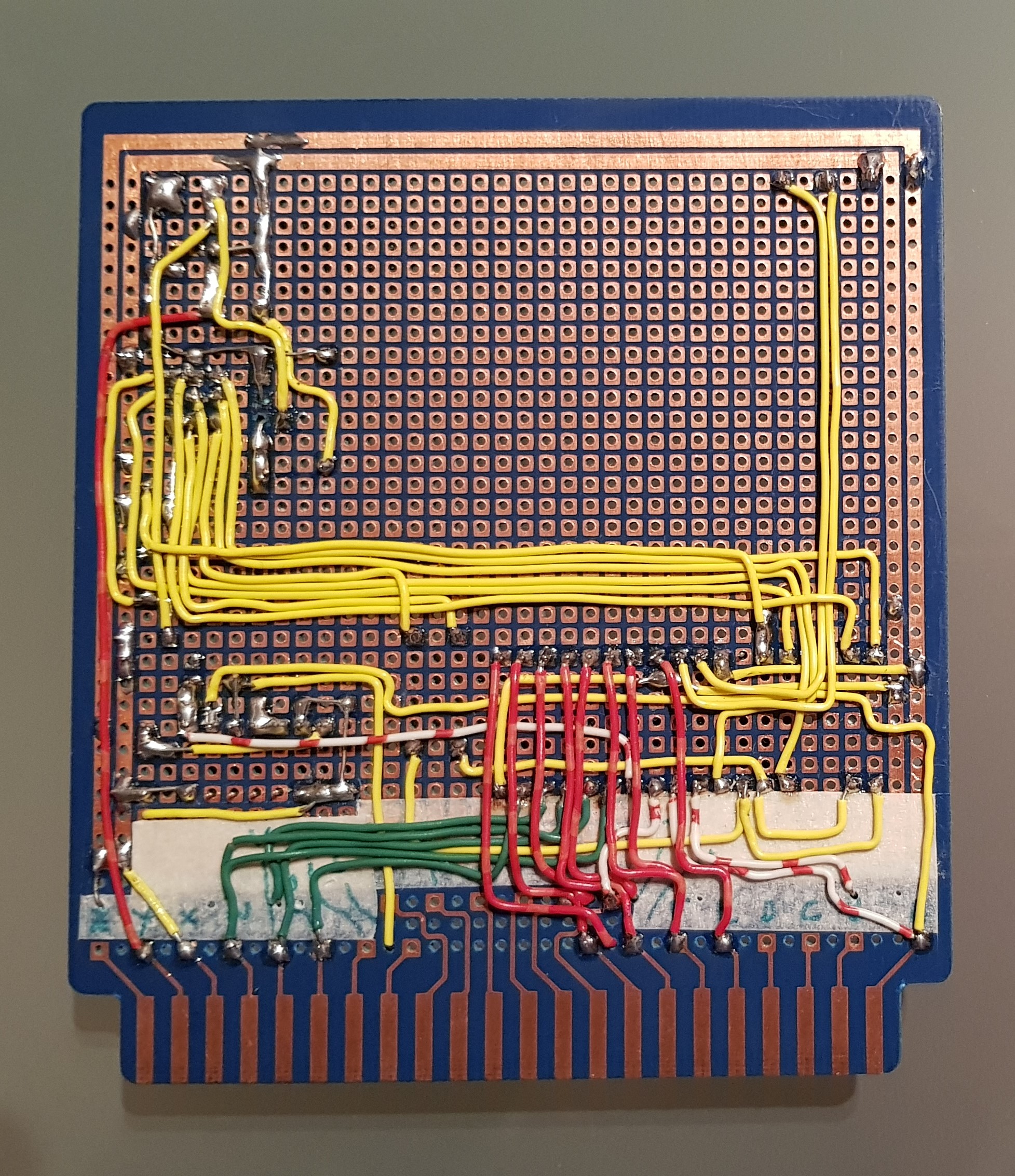 The goal of his project was to play SID tunes. Sampo included also a CIA and an EEPROM to store the player’s code. CIA’s purpose was to generate IRQs in order to allow the software to play the tunes properly. Nevertheless, the compatibility with the tunes was limited due to lack of IRQs.

I contacted Sampo to have informations about the status of his project, which seems to be discontinued.

I am quite confident in stating that we both agree that my project is totally different in approach, purpose and implementation.