The purpose of this document is to clarify how variables are stored in RAM and how this information can be used. This information applies to Apple-1 (both Originals and Replicas) and to most of the emulators.

Let us suppose, from now on, that the memory configuration is “standard” according to the indications in the manual:

BASIC will be loaded in the optional RAM BANK.
We will not consider memory manipulation made by LOMEM or HIMEM commands.

A BASIC program is stored so that its end coincides with the last byte of memory available. 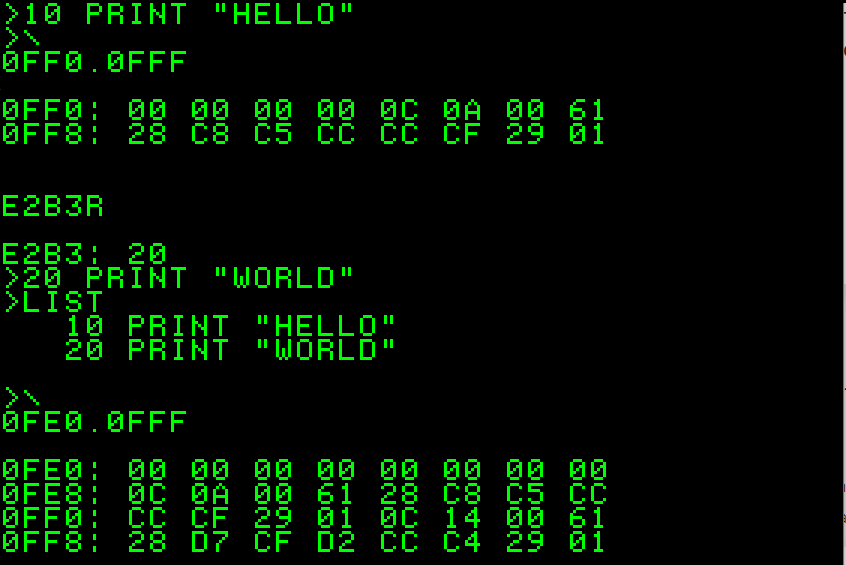 Is it reasonable to assume that variables will be stored at the opposite end of the available memory, in order to avoid any conflict with the program code. A quick inspection of the first locations shows nothing, which is also reasonable because our program uses no variables at all:

Let us restart everything and declare a variable, and see what happens: 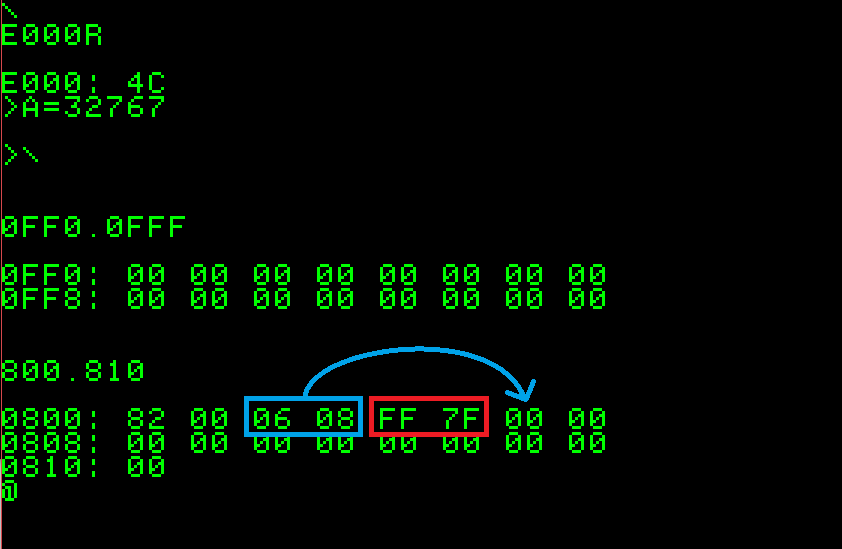 As expected, nothing is stored in the “program area” of the memory, since we did not write any program.

I choose 32767 as value for the variable because it is hexadecimal \$7FFF and its HI and LO bytes are quite recognisable among all the others.

They look to be stored in little-endian notation, two bytes as expected in locations \$0804 and \$0805.
Are we able to spot out other informations from the hexdump?

We will get into the details in a little while, in the meantime: they are related to the variable name.

Let us try now to declare two numeric variables and see what happens:

Again, I chose a value for variable B easy to spot out: -21555, which is \$ABCD in signed integer INTEGER BASIC notation. \$CD and \$AB are clearly visible in the hexdump in the usual little-endian notation.

What else? Well, we can now see that the new variable starts where indicated from the previous one (\$0806), the first number is also \$84 instead of \$82.
This could be something related to the variable name (“A” the first variable, “B” the second), while the next octet is still \$00.
After this, we can see the pointer to the next variable (\$080C, now free) and, marked in red, the value of variable B.

So far, we have understood that numeric variables and their content are daisy-chained in order not to waste memory space.

Let us see what happens if we add a previously DIMed string variable. 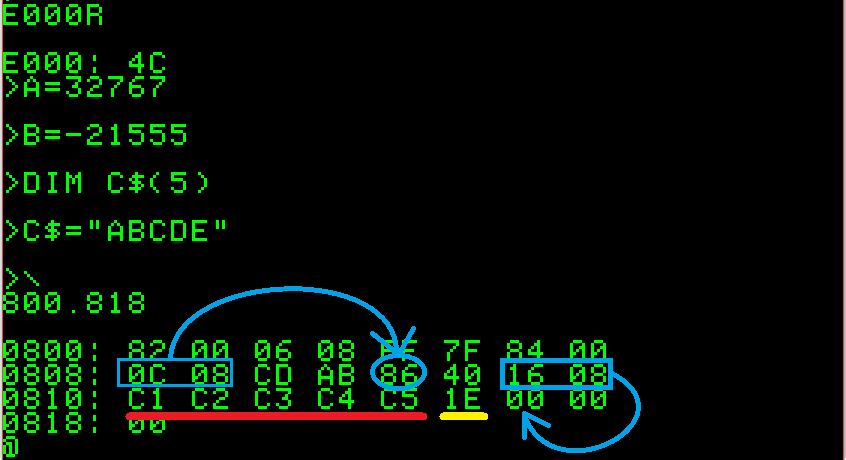 At the end of our string values, there is \$1E byte. Its meaning, among the ASCII non-printable characters is “Record Separator”. It is clearly an end-of-text marker and could be used by BASIC to retrieve the string content (one found among all the other) more quickly than analysing next variable pointer.

A non-DIMed variable, which can contain only one character, will have only one byte of RAM allocated, plus one for the \$1E Record Separator.

It should also be clear now how a string is stored in RAM.
The memory allocation take place only once the DIM command is issued, the content is written in the reserved space subsequently.

How about arrays? Let’s have a look at the following example, keeping in mind that array can be only numeric: string arrays are not implemented. 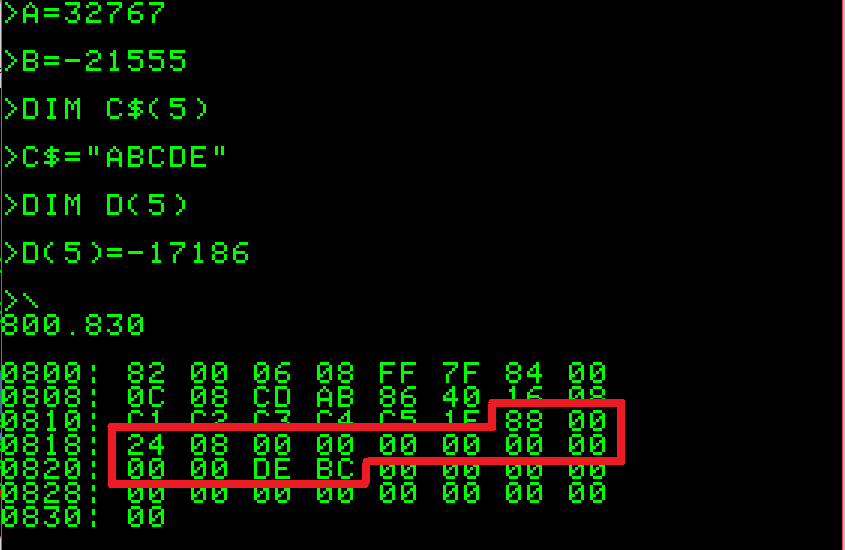 I chose this value to highlight the boundary of the array with a recognisable couple of hexadecimal values.

In the picture above, we can clearly see that \$88 is the “name” of our array, \$00 means that is a numeric variable and \$0824 is the pointer to the next variable. Then follows a few bytes with no value, then the content of our array element D(5): \$BCDE in the usual format.
From this, we can tell that the DIMensioning of an array takes/reserves twice the bytes of the number of the elements of the array.
In addition: the uninitialized array elements are set to zero as stated in the BASIC Manual.
We can also tell that array elements 0 and 1 will have the same value, because we have only ten bytes allocated for our array of five elements.

The storage method of arrays is no different from what we saw in the previous examples.

We have only one last case of study, which is the mixed variable name: letter+number. This can be done only with numeric variables, no strings.

Let’s clear the emulator memory in order to reduce the number of informations displayed and try the following example: 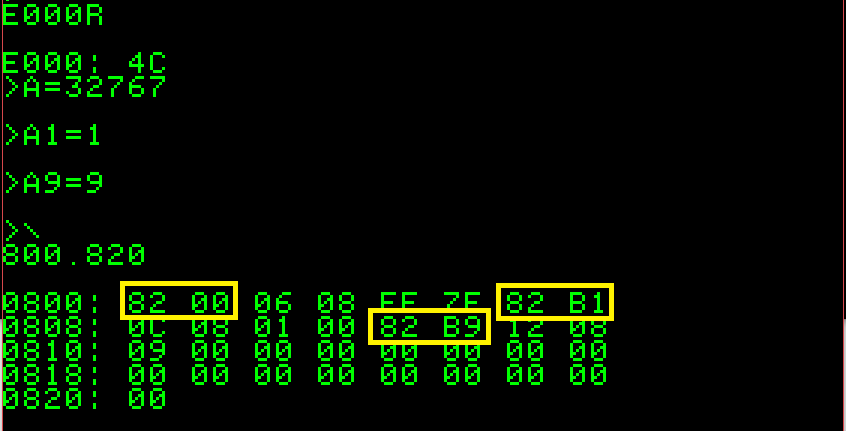 Let’s take for granted that we already know how numeric variables are stored and how pointer to next variable works. Now focus on the first and second octet of each variable, marked in yellow in the picture before.

It is clear that second octet is the numeric part of the mixed-name variable. Until now, we have seen the second byte only set to \$00 for numeric variables and to \$40 for string variables, we now know that it can also assume values from \$B1 to \$B9.

It is clear that the hexadecimal value used to store the variable name in RAM is the corresponding ASCII valued rotated (or shifted) left by one position. Because we are using a subset of the ASCII set, (just the letters A…Z) we can also assume that the value used is the ASCII value multiplied by two.

It is not clear to me the reason for this special handling, certainly the condition “= \$82” cannot be used to scan the memory area in search of the variable A: \$82 could be a legitimate value of a numeric variable… but probably I am missing something.

A couple of final notes: if a LOMEM command is issued as first command, all the variables will be stored starting from the LOMEM address.

If the declaration of variables is done inside a BASIC program, the memory will be allocated when the corresponding program line is executed.

Therefore, this grid should recap how variables are stored on to the RAM of the Apple-1, just keep in mind to start at the beginning of the RAM area: 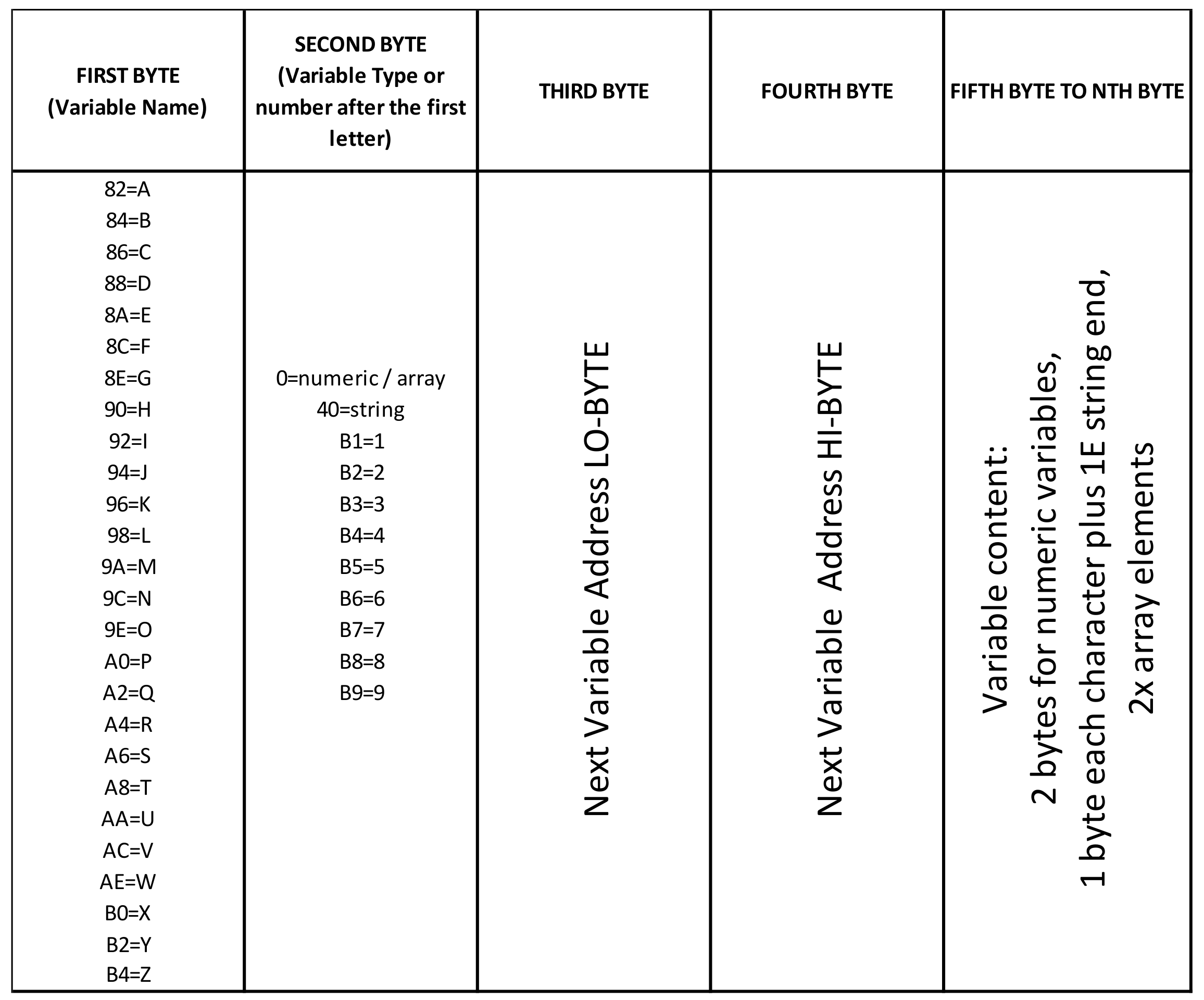 Line 10-50: Sample variables that will be inspected by the rest of the program.

Line 20000: Subroutine reading memory increasing a counter. Variable “I” is the current location to be read, variable “V” is the value read. 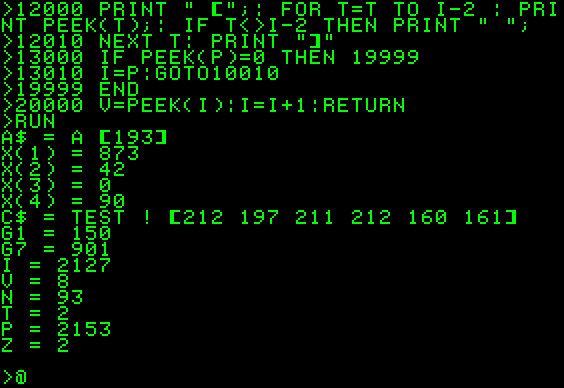